Up until the 1840s the area now occupied by Arbury Park Outdoor School lay on the western edge of the country inhabited by Peramangk Aboriginal people. They occupied the eastern scarp of the Mount Lofty Ranges covering an area approximately 250 square kilometres from Myponga north to Gawler and Angaston and south to Strathalbyn. 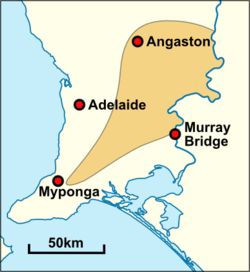 The Peramangk occupied an area which was well endowed with resources, food, water, firewood, and raw materials such as stone; timber and resins for tool manufacture; bark for huts, shields and canoes; pigments for painting; furred animals for warm rugs, etc. During winter, they constructed warm, dry huts of branches, bark grass and leaves, often built around the hollow side of old red gums.

They were encountered by European explorers, squatters and overlanders who passed through this area or settled there. Sometimes they visited the settlement of Adelaide in a large group to conduct ceremonial business and social gatherings, and no doubt to observe the strange appearance, habits and artifacts of the European interlopers. This contact was mostly peaceful, although the European police troopers did harass them on occasion. Not until the mid 1840’s, when flocks of sheep were crowding the watering places and grazing lands of the “Hills tribe” and the animals which they hunted for food, did open conflicts arise. Even then, the source of confrontation was the right of local Aborigines to take for their own use some of the animals and material goods which the Europeans had placed on their traditional lands. There was apparently little physical violence, and in some cases food and other items were given by farmers in exchange for assistance with harvesting crops (eg wheat and potatoes), at a time when farm labour was in desperately short supply.

However, by the late 1850’s the scattered documentary sources cease to mention the Hills tribe; there is only the chronicle of a growing agricultural district. Only fragmentary descriptions have been recorded of the traditional way of life of the Peramangk. This is a sad commentary on the devastating effect of European incursions upon Aboriginal Australia.

Most of the historical information relating to the Peramangk consists of passing references in European diaries, official’s records, or personal memoirs. They are barely mentioned in the early ethnographic literature concerning Aborigines, written in the late nineteenth century.

European settlers arrived on the Adelaide Plains in 1836. These people needed shelter and houses so they looked towards the nearby hills and the timber that could be seen in plenty. From the plains the hills looked like tiers so they became known as “The Tiers”. The people who eventually came to live and work in them were known as Tiersmen. By 1837 people were working in the Tiers as cutters, sawyers and splitters, sending their wood to the timber merchants on the plains for building and establishing the new colony. The tall stringy bark eucalypts were ideal for building. The settlers found the timber long and straight and the bark useful for thatching roofs.

On Christmas Day 1838 Robert Cock led a party of four men into the Tiers to try and find a route to the River Murray. They eventually made their way through to Lake Alexandrina. Wood splitters and sawyers soon followed Cock’s route to the creek then name Cock’s Creek (now Cox Creek). In 1841 an inn was established on the Cox Creek called the “Rural Deanery”, named after its owner Benjamin Dean.

The land on which the school is located, was bought by the South Australian Government in 1964 from Sir Alexander Downer, a former Australian High Commissioner to London. His family named the property after an estate in Warwickshire, Arbury Hall. The site had been a thriving nursery, Raywood Nursery, and many of the exotic trees still present are remnants of this activity. Commonwealth as well as State government funding was made available for construction of the school.

In 1965, Dr Alby Jones, then superintendent of teacher recruiting and training “looked to the day when South Australia would have its first true outdoor school, where children could camp and learn not only everyday lessons but also about nature, the environment and themselves”. In 1975, as Director-General of Education, Dr Jones secured funding from the Commonwealth Schools Commission to enable the SA Education Department to develop Arbury Park Outdoor School. In his words “..it would be a school, not a holiday resort, for students from all types of schools …They would come to learn, particularly from the natural resources of Arbury Park. They would learn to live together, to cooperate and to share, and of course, it would be pleasurable, it would be fun.”

The final stages of construction were being completed when the first students, from Keller Road Primary School, Salisbury East, arrived on 15 March 1976. The school was officially opened on 4 November 1976.

As part of the school’s 20th anniversary celebrations in 1996, a small ephemeral wetland development was opened and dedicated to the memory of Brian Foreman, the school’s first principal. The wetlands continue to be a wonderful outdoor classroom where students learn about freshwater life, birds and wetland plants.

The Cox Creek section of the school has been the site of considerable activity and student involvement since February 1997. The “Cox Creek Rehabilitation Project”, a cooperative project of the Deanery Community Landcare Group, began with funding from the Mt Lofty Ranges Catchment Program to remove 80 mature basket willows and subsequently revegetate the creek banks. Students and staff at Arbury Park continue to propagate and plant out local species into this area providing benefits for the local environment and the local community

Other projects that model sustainable living include ongoing revegetation and weed control of the stringybark forest, insulation of the dormitories in 2002, the construction in 2009 of 4 large tanks that store 340 kL of rainwater harvested from APOS buildings, and the installation of a 9.4kW rooftop solar panels on the dining room, completed in 2012.

Fire danger has always been part of the school’s management planning, and in November 2013, this planning proved invaluable when a fire burnt approximately 9 hectares of stringybark forest. Fire systems and the generous on ground help from CFS volunteers contained the fire with no damage to buildings. The regeneration of the burnt bush reminds us of the resilience and complexity of our beautiful outdoor classroom.